First, the relatively good news. India has maintained its rank as the world’s 15th biggest recorded music market, according to the International Federation of the Phonographic Industry (IFPI)’s Global Music Report (GMR) for 2019, which was released earlier this month.

India’s recorded music revenues by format (figures in US$ million)

Now the bad news: The rate of growth has actually slowed down from 25.4 percent in 2018. Unsurprisingly, the bulk of this rise came from streaming revenue, the share of which increased from 69.5 percent to 73.2 percent thanks to a 25.5 percent spike from 2018.

But we’re still only the 17th biggest market in the world as far as streaming is concerned.

Ad-supported streaming revenue, on the other hand, increased at a healthier clip, rising 41.4 percent from last year, only slightly down from the 44 percent jump in 2018. Similarly, income from video streams (read YouTube) shot up 35 percent in 2019, as opposed to the 14 percent growth in 2018 but down from the massive 435.5 percent increase of 2017.

Of course, the country’s record labels aren’t celebrating these achievements because they’re reeling under the adverse impact of the coronavirus, which has placed a prolonged pause of their main income generator: film soundtracks. Things are so bleak that the national trade body, the Indian Music Industry, which supplies India data to the GMR, has yet to update its website with the 2019 statistics.

Yet statistics for 2019 show that the dominance of Bollywood music at least is declining. The non-film tracks “Vaaste”, “Filhall”, “Pachtaoge”, “Dheeme Dheeme” and “She Don’t Know”, made up half of the top 10 songs of 2019, as per the IMI. That said, the list of the top 10 albums of 2019 almost entirely comprised Hindi film OSTs. 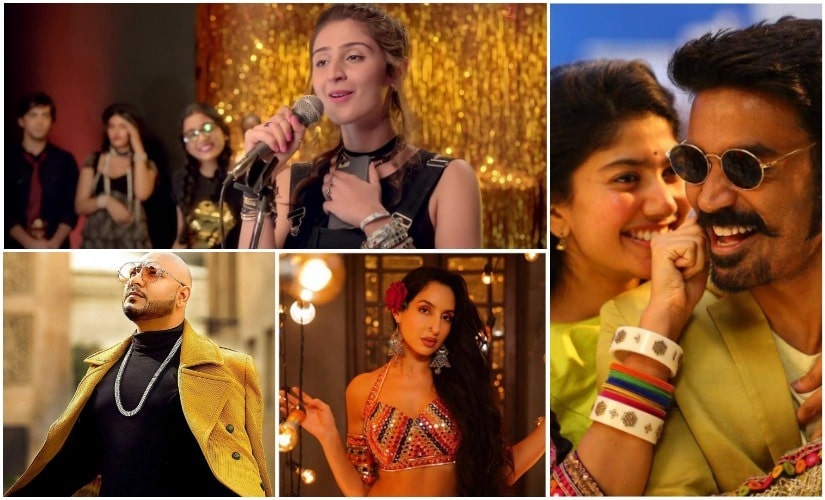 There are several reasons for this. “Non-film” music is treated as a singles market and majors such as Sony, Universal and T-Series that have a strong presence in the segment, rarely release albums by the genre’s acts. And a single is by default a video. Songs are marketed on the back of the celebrities appearing in the videos. They range from Bollywood stars to TV actors to TikTok influencers and are frequently given “featuring” credits on the track even though they have nothing to do with its composition.

There is however the argument that “non-film” is really film music by another name given that its most prominent artists are also Bollywood playback singers and that their so-called “independent” songs are indistinguishable from what you might hear on your average OST.

Nevertheless, that fans are tuning into this music without caring so much about whether or not it’s attached to a movie is encouraging for our record industry that has thus far been overly dependent on the film industry. Today, the main medium of music consumption in the country has moved from the silver screen to the mobile screen and specifically to YouTube, which 240 million Indians are said to use to “listen” to music in India.

The GMR does not elaborate how India’s Top Songs charts was compiled but it’s clear from the high position of “Rowdy Baby” — the only Indian video to make YouTube’s own year-end top 10 for 2019 — that it took into consideration views on the platform.

But here’s some more bad news. According to music streaming analytics company Chartmetric, the overall views for the country’s top 100 artists on YouTube fell substantially, by 75 percent between the end of March and the end of April 2020. Given the importance of video streams to India’s recorded music revenues, and the importance of YouTube for both film and non-film music, that’s cause to worry.

On the bright side for local labels, audio OTT services have reported an increase in streaming numbers over the past two months, even if this means little for the artists behind the music who stand to make little, if anything at all, in the form of royalties.

With the prolonged prohibition of large gatherings and uncertainty over when restaurants, bars, malls and gyms will be allowed to reopen, performance rights revenue will likely also fall this year. All this calls into question whether the Indian music industry will stay on course to meet its goal of becoming one of the world’s top 10 music markets by 2022.

To end on an overly optimistic note, know that seven and a half of the top 10 songs of 2019 were original compositions. Two, “O Saaki Saaki” and “Mungda”, are remixes and one (which I’m calling half a remix), “Dheeme Dheeme”, is a pop track that was subsequently used in the movie Pati, Patni Aur Woh. Which shows that the much-touted public demand for these “recreations” is less than what labels would like us to believe. Here’s hoping that along with the pandemic, we’re rid of them soon.

*Artist credits as per the GMR.

RECENTLY PLAYED
A few readers seem to mistakenly think that the Recently Played section of this column is connected with the main subject. To clarify, they’re unrelated. I started it to highlight recent Indian independent music releases that I’ve enjoyed. To make it even clearer, this time around I’m recommending one audio track, one music video and one EP/album put out since the publication of my last column.

The coronavirus crisis has brought on a number of well-intentioned wannabe “We Are The World”s from the country’s playback and pop community. Most of them are as tedious as another round of swabbing the house. That musicians can tackle serious subject without being sad or saccharine is evident in singer-songwriter Aditi Ramesh’s new single “Heal”, which was also inspired by and completed during the lockdown. The mid-tempo R&B tune addresses the anxieties we’re all experiencing but also offers advice, instruction and most importantly, hope.

Veteran Indian indie music scenesters know Sandeep Mittal as the founder of the erstwhile rock and metal-focused website and online forum Gigpad. More recently, the consultant and classic rock composer has been spending this time at home experimenting with stop-motion animation to make music videos using his son’s Lego kits. If his first video, for a reworking of his former band The Second Shift’s 2010 song “Baby of the Times”, was impressive, then his second, for the title cut of his 2016 solo album Riven, ups the ante with lots more action and the addition of animated backgrounds.

A lot of people expressed shock at the stark gender disparity in the Indian indie albums and EPs released in 2020 that I wrote about. I’m sorry to share that the disparity seems to have got starker in the month since those stats were published. Almost all the new efforts have been by male artist or groups comprising men. An exception is Dimapur-based band Trance Effect’s EP Clowns whose lead singer is the powerhouse female vocalist Iuli Yeptho. But that’s not why I’ve picked it. I’ve chosen Clowns because it’s the kind of bright synth-pop-rock that can lighten a gloomy day, the type where the upbeat instrumentation and evocative vocals make its moments of melancholic reflection (like “Took Me A While” and “Favourite Mistake”) feel like those for sing-along celebration.

Amit Gurbaxani is a Mumbai-based journalist who has been writing about music, specifically the country’s independent scene, for nearly two decades. He tweets @TheGroovebox

‘We now plan to fight it in court’- Entertainment News, Firstpost

Sia to release new single Together on 20 May; song will feature in soundtrack of her film Music- Entertainment News, Firstpost

No Time to Die theme song will be, written, recorded by Billie Eilish, youngest artist to do so for a Bond film- Entertainment News, Firstpost